The versatile ascent to Val Frisal leads from Cuort in Brigel's village along the Flem (village stream), in the midst of a magnificent alpine flora. On the left side of the road near Chischarolas, the hike leads past Switzerland's smallest but highest primeval forest.

In Switzerland, there are three remaining spruce forests. The spruce forest Scatlé above Brigels is the smallest but the highest of its kind in Europe. It is located on the Eastern slope of Val Frisal between 1.500 and 2.000 m above sea level.

Despite its small size, the Scatlé is hardly influenced by the neighbouring areas - a growing avalanche path, grazing forests, green alder - and is preserved in its natural form. The jungle character of these spruce trees is proven back to the 13th century. Since the beginning of time, the smallest of the three spruce forests in Switzerland has never been used for commercial purposes.

Thanks to the rugged terrain, the forest can rejuvenate and develop on a small scale. Collapses of the stock due to storms, avalanches and snow pressure have occurred locally, but the jungle as a whole was never threatened.

The forest of Scatli rejuvenates in a very irregularly pattern. In addition to the 30-metre-high spruce trees with over 650 rings for years, you can also discover 50-year-old spruce trees that are barely 50 cm high.

Time for a break

Time for a break

There is a fireplace at the Scatlé spruce forest. Here, a little break is especially worthwhile.

And if you are not tired after the hike, we recommend climbing to the viewpoint Crap Cavigliauna on the way back. 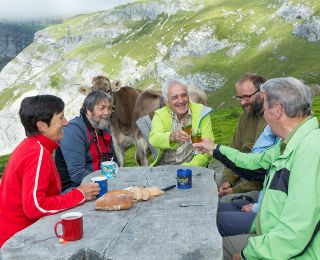 For the well-deserved break

Regain your strength for the rest of the hike at one of the numerous fireplaces.

to the fireplaces and viewpoints